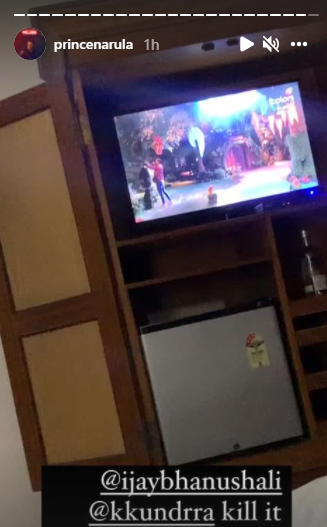 Bigg Boss premiere night is underway and viewers are supporting their favourite contestants as they are introduced by host Salman Khan. As many as 15 participants will be entering the show in a grand premiere episode. Jay Bhanushali, actor and host, was the first contestant to be introduced and he did not meet Salman on stage but inside the jungle theme house. Salman warned him that this time around, the show will be tougher than ever before.

Meanwhile, Prince Narula, who participated in Bigg Boss 9, lent his support to Jay and Karan Kundrra. He shared a glimpse of his living room where is seen watching the premiere episode of Bogg Boss on his TV and wrote “kill it” for Jay and Karan. Both Karan and Jay are among the most popular faces to feature in the show.

Mahhi Vij, Jay’s wife, was super thrilled about her husband’s entry into the Bigg Boss 15 house. Mahhi planned a get-together with Jay’s close friends and her family to watch the Bigg Boss premiere. episode She took to her social media to share a video of their daughter Tara’s reaction when she saw Jay on screen. The two-year-old ran towards the TV screen and called out “papa”. The adorable moment will melt your hearts. Jay had confessed that his daughter is his biggest weakness.