Disha Patani is one of the fittest and hottest actresses we have in Bollywood right now and her fans on social media will vouch for the same. The actress recently shared a sensual throwback picture of herself from the ocean and her fans just cannot have enough of her.

Check out the picture here: In the photo, Disha is seen posing in the middle of the ocean in a bikini with sunset in the background, creating a perfect silhouette.

No sooner did she share the photo on Instagram, fans flooded the comment section with praise. While some called her a “Goddess”, some declared her the “hottest person alive”. 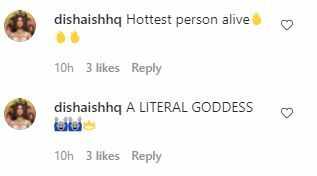 Disha is in a rumoured relationship with Tiger Shroff. Although they are yet to come out in open about their relationship, their social media PDAs, dinner dates and outings speak volumes about their love affair. Disha also shares a close bond with Tiger’s family, especially with his mother Ayesha and sister Krishna Shroff.

Meanwhile, on the work front, Disha was last seen in Prabhudheva’s ‘Radhe: Your Most Wanted Bhai’ where she reunited with her ‘Bharat’ co-star Salman Khan. The movie also featured Randeep Hooda and Jackie Shroff in key roles. The film received mixed reviews from the audience and the critics alike.

Next, she will be seen in Mohit Suri’s ‘Ek Villain Returns’ which will also star John Abraham, Tara Sutaria and Arjun Kapoor in lead roles. This will be Disha’s second outing with Suri after ‘Malang’.

Did you know that once Deepika Padukone went down on her knees to propose to Salman Khan? – Times of India

‘Padmaavat’ to ‘Laxmmi’: Movies that changed their titles due to controversies