Fan asks SRK about the sequel of ‘Jab Harry Met Sejal’, his reply will leave you in splits - Times of India
Advertisement

Watch: Kriti Sanon carries THIS book along with her at the airport as she preps for 'Adipurush' shoot - Times of India

​These Alluring Pictures of Sanchita Shetty Are a Treat to Eyes

Shilpa Shetty talks about realising the importance of mental health since pandemic: We need to put in that extra effort to stay afloat - Times of India

On Wednesday afternoon, Shah Rukh Khan hosted yet another fun-filled #AskSRK session on Twitter. Fans from all across the world quizzed him about his personal and professional life. As usual, King Khan was at his best and answered most of the questions. In fact, some of the replies by SRK left fans in splits.

One such Twitter user asked the superstar about the sequel of ‘Jab Harry Met Sejal’ and his hilarious reply won millions of hearts. 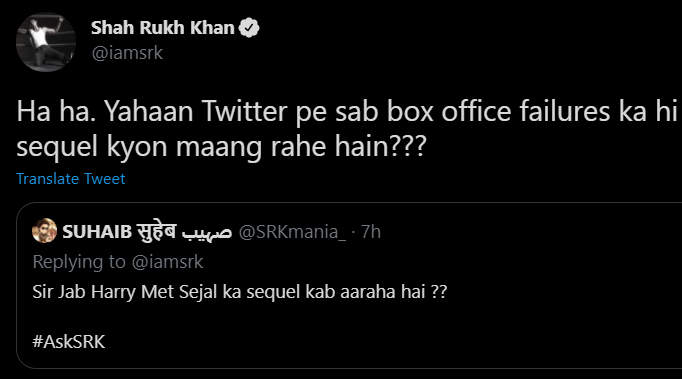 The king of romance also had a funny reply when a fan asked about his friends in Bollywood.

“Sir, you once told on KwK (Koffee with Karan) that you have no friends and you don’t know how to maintain friendships. Would you still say the same?” Shah Rukh Khan replied, “Nahi ab mere bachche mere dost hain.”

Meanwhile, another Twitter user asked him about his upcoming project to give SRK a witty response.

“#AskSRK any any any hint or glimpse of your next movie we are sooooo soooo despite !!!!!” asked the fan. The actor said, “Arre so many films waiting to release in the cans….our turn will come after them, don’t worry!”

Meanwhile, on the work front, he is currently shooting for Siddharth Anand’s ‘Pathan’. The film will also star Deepika Padukone and John Abraham in lead roles. If the reports are to be believed, ‘Pathan’ will also have a cameo by Salman Khan.

Exclusive! Manoj Bajpayee on 50 per cent occupancy in theatres: I want normalcy but it will only be possible when the vaccine reaches everyone – Times of India