Apple is working on satellite capabilities for the iPhone that allows users to send texts in emergency situations, reports Bloomberg. This feature also allows iPhone users to report crashes and other emergencies in areas where there is no cellular coverage. 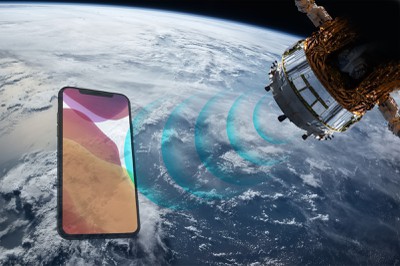 There are at least two emergency features that rely on satellite networks, and while satellite technology has been in the works for years, these capabilities are unlikely to launch in 2021.

The first feature, Emergency Message via Satellite, is designed to allow users to text emergency services and contacts over a satellite network when no signal is available, and it will be integrated into the Messages app as a third communication protocol in addition to SMS and iMessage. It will contain gray message bubbles instead of green or blue, and the message length is limited.

The SMS-via-satellite tool, codenamed Stewie within Apple, will restrict messages to a shorter length. The text messages are automatically forwarded to an emergency contact’s phone, even if the do not disturb setting is turned on. One planned design has a user send the message by typing “Emergency SOS” where they would normally enter a contact name. In addition to delivering texts, the service can eventually handle some phone calls as well.

The second function allows users to report major emergencies such as plane crashes and fires via satellite networks. It will be similar to a “911” call in the US and can provide information such as a user’s location and medical ID, in addition to alerting emergency contacts.

A report on the weekend from Apple analyst Ming Chi Kuo’ said that the iPhone 13 would include low Earth orbit satellite communications connectivity to allow users to make calls and send messages without 4G and 5G coverage, but further analysis has revealed: that this suggestion is incorrect and improbable.

According to BloombergIf Apple implements satellite connectivity, it will be limited to “crisis scenarios” and will not be an alternative to cellular networks that allow widespread texting and calling.

Apple will not launch these satellite capabilities in every country, and their availability will depend on local regulations and satellite locations. A built-in function will prompt users to go outside and walk in a certain direction to help the iPhone‌ connect to a satellite. Connections may not be instantaneous and it can take up to a minute for an “iPhone” to successfully communicate with a satellite.

Connecting to satellites requires a special modem chip, and Apple will continue to use Qualcomm technology for years to come. It’s not clear if Apple will partner with Globalstar, as Kuo has suggested. Globalstar competitors Iridium Communications and Omnispace are not partnering with Apple, according to: Bloomberg, but the report does not rule out Globalstar.

The satellite functions will “probably not be ready before next year,” although Apple’s modem chips this year may have “the hardware needed for satellite communications.” The functionality could be changed or dropped before Apple plans to launch it and it’s not finalized yet.

Apple has considered launching its own satellites, but planned emergency functions will depend on existing networks.